My daily routine is pretty straight forward: Wake up, head to work, “make dat doe,” head home, work on photography/illustration/animation, play too little of a video game/watch too much television, read a few web comics, fall asleep. Okay, maybe my routine is just as involved as anyone’s. Regardless, the second to last step is the most important for this particular article.

My current webcomic addiction is David Willis’s magnum opus, Dumbing of Age. If you haven’t read it, I highly recommend it. The best way to describe his comic is as a college student driven story of self-exploration, self-interpretation and occasionally self-exploitation. His characters are ridiculously, yet believably, diverse. From his semi biographical Joyce, to the only-here-to-antagonize-the-trolls Malaya, each person is drawn and written with purpose. Their every wish and desire clings to you to from beginning to end. So, you can imagine why fans of the comics scream, “Damn You Willis!” when he quickly adds angst to the mix.

It is hard to believe that Willis’s current flagship comic is actually a spinoff. Dumbing of Age shares characters with its alternate universe original, Roomies. Roomies evolved and gave birth to It’s Walky!, ending with Joyce and Walky! to complete the cycle. While Roomies was a collage age drama like Dumbing of Age, It’s Walky! was a sci-fi drama affair. Which brings us to today’s project.

Meet Head Alien. While he certainly was the primary antagonist of It’s Walky, “Dexter,” was more akin to the zombies in the Walking Dead than a traditional villain. In other words, Willis chose to use Head Alien’s schemes and plots to add tension, rather than a clichéd means to heroic ends. Whether it was a last minute revelation, and/or literally dropping one’s adoptive parents on top of them, (Hey, you’re adopted! On an unrelated note, your foster parents are dead! Oh wait, that was literally and figuratively related! Mwahahaha!) Head Alien made readers love to hate him. 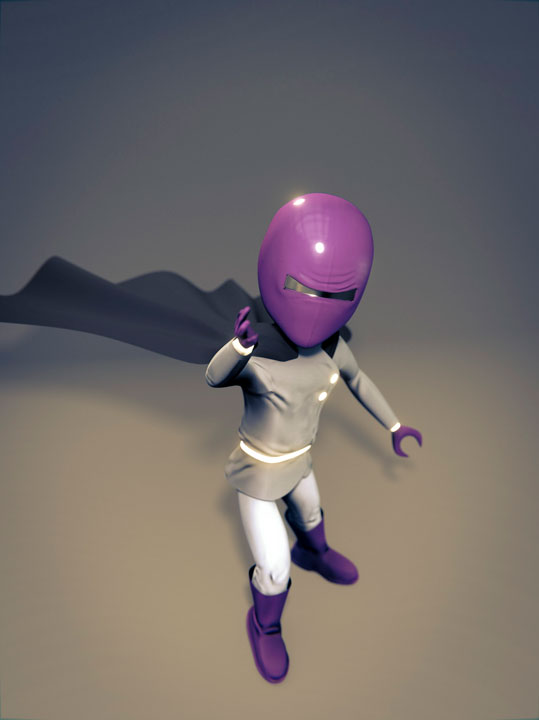 …it makes for pretty good wallpapers for your favorite devices. I used Blender to model, ZBrush for texturing, and then went back to Blender for rendering using the Cycles engine. There’s still more work to be done, but in the meantime, enjoy.